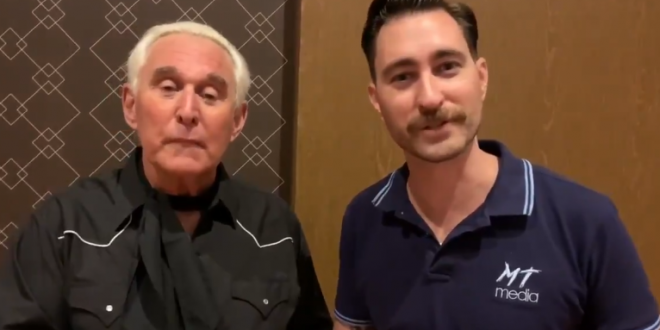 Roger Stone endorsed Nick Ochs, the leader of a Hawaii chapter of “western chauvinist” hate group the Proud Boys, in his campaign for a state representative seat. The Proud Boys, whose members have been linked to acts of street violence, often provide security for Stone.

Ochs is the Republican nominee for Hawaii House of Representatives District 22 following his victory in an uncontested primary election.

He will face Democrat Adrian Tam during the general election on November 3. According to University of Hawaii at Manoa student newspaper Ho’a O’ahu, Ochs was associated with President Donald Trump’s Hawaii campaign before founding a chapter of the Proud Boys, which has become “one [of] Honolulu’s most reviled conservative organizations.”

Trump’s 2016 vice chair for Hawaii, Nick Ochs, posted a Facebook video of himself urinating into a Hawaiian volcano. Many Hawaiians believe the volcanoes are sacred and should be respected. Nick Ochs is a Republican candidate backed by @gophawaii. He is also a Proud Boy. pic.twitter.com/Xb9FLxTbc1

Hawaii Republican candidate Nick Ochs once said that #AltonSterling, a victim of police violence, “was a piece of shit” that “lived about 20 seconds longer than he should have expected to.” pic.twitter.com/7B9aR288ki

Nick Ochs posted a homophobic rant about how “the gays” took things “from us.” This candidate is backed by the @gophawaii. pic.twitter.com/mBzu3pDPFn

Proud Boy Nick Ochs says he is the president of TPUSA in Hawaii. pic.twitter.com/erlngu1Mz4

Big endorsement announcement! Stone stands for Ochs and I stand for Stone!

Click the link below to support the campaign too!https://t.co/4sM3CDrlw3 pic.twitter.com/qRfgY1nTHp

Previous Biden Won’t Give Trump Ammo On Expanding SCOTUS
Next WH Defends Trump’s “Virtually Nobody” Lie: You’re Taking Him Out Of Context, He Was “Telling The Truth”