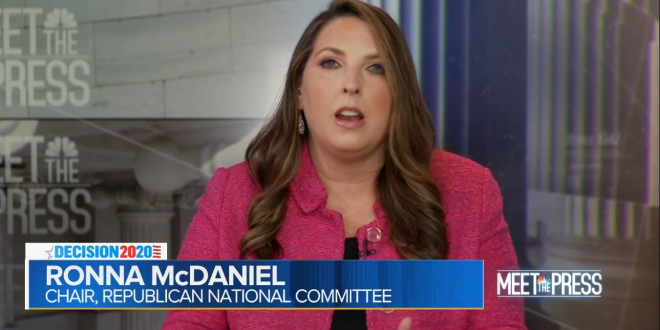 In an interview with “Meet the Press,” McDaniel maintained that “20/20 vision is, in hindsight, perfect,” and insisted that Trump acted “calm and steady and methodical” as he handled the pandemic, pointing to early steps he took like cancelling travel from China and creating the coronavirus task force.

“The president was calm and steady in a time of unrest and uncertainty. And I think history will look back on him well as to how he handled this pandemic,” she said.

So, Ronna McDaniel @GOPChairwoman tells us that we have 25% of the worlds COVID deaths because we do more testing. Yes, the GOP is now arguing that we would not know if people are dead if we didn’t run tests.

There are no words.

Chuck Todd asks Ronna McDaniel how this isn’t a failure of the U.S.?

McDaniel: “He was running for president… and I don’t think this should be laid at the feet of Pres. Trump.”

EXCLUSIVE on #MTP: RNC Chair Ronna McDaniel defends Trump’s pandemic response@ChuckTodd: “How do you account for the fact that it’s the United States of America that accounts for 25% of the world’s deaths?

RNC Chair Ronna McDaniel: “Well, we have, we do have more testing.” pic.twitter.com/rtUWjhjhJI