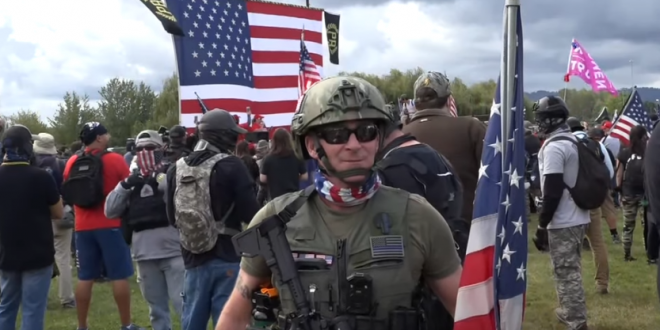 A rally by the far-right Proud Boys in Portland, Oregon, in support of President Donald Trump and police drew about 200 protesters Saturday afternoon, far fewer than the expected thousands that led the city to brace for potential violence.

Among the rallygoers who gathered at a city park were dozens wearing militarized body armor, including helmets and protective vests. Many flew American flags or black flags bearing the logo of the Three Percenters, another far-right group, and some wore Make America Great Again hats. Some had long guns.

The Multnomah County sheriff had said police were anticipating a crowd of 1,000 to 3,000 people at the demonstration, NBC affiliate KGW reported. Organizers of the rally had said they expected to draw 20,000 people.

Trump militia in Portland – out of state white supremacists and hate group Proud Boys. This is Donald Trump’s America.

Who wouldn’t want 4 more years of this! Vote them all TF out!pic.twitter.com/yLMXHcWPMd

The attendance for the Portland rally was predicted to be in the thousands by the Proud Boys.

Proud Boys rally in Portland draws only about 200 after city braced for thousands. https://t.co/nMHLgX6zKA

“They want to have an all-women, lesbian society”

Can’t wait for Laura Ingraham to investigate who paid for these shields and a bunch of Proud Boys’ airfares from across the country to attend a fascist rally celebrating a killer https://t.co/JWlq8Te9rs

A man just arrived at the Proud Boys event with vehicles emblazoned “American Wolf” and said he had 30 shields for whoever wanted them. pic.twitter.com/MPNZbZAxzk

“We’re gonna monitor those ballots when they come in” Oregon woman for trump organizer says their going to “protect” ballot drop off locations pic.twitter.com/pF348OhJ8z

Proud Boys would be a fantastic name for a gay bar