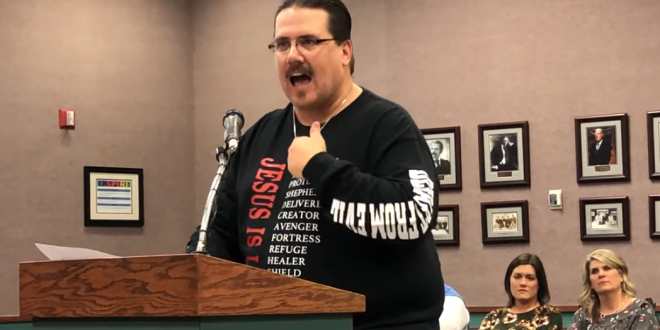 An outspoken Christian preacher and activist is accusing his daughter’s school of violating her First Amendment rights by forcing her to change out of a shirt proclaiming that “homosexuality is a sin.” He is contemplating legal action. Brielle Penkoski, the daughter of Rev. Rich Penkoski, attends Livingston Academy, a public high school in Livingston, Tennessee. During the school day on Tuesday, Aug. 25, she was allegedly asked to change out of a black T-shirt shirt bearing white letters asserting that “homosexuality is a sin.”

The shirt references the New Testament passage of 1 Corinthians 6:9-10. When she refused to change out of the shirt, she was sent home from school, her father told The Christian Post in a recent interview. Penkoski, who regularly speaks out in opposition to things like homosexuality and Drag Queen Story Hour events, runs an organization called Warriors for Christ, which describes itself as a “pre-denominational ministry” that has a global online presence.

Join us Tonight at 10:30 PM for our Broadcast Why I Hate Sissy Preaching Part 2

Keep exposing the hate from the lgbtqrhiv. Show the world who these hateful devils really are!!