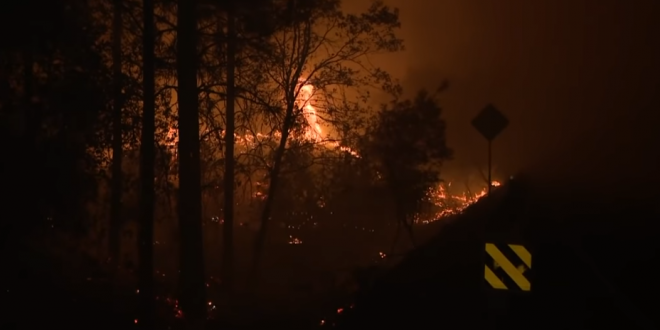 Around half a million people in Oregon were ordered to evacuate on Friday and residents of its largest city, Portland, were told to be ready to go as extreme wind-driven wildfires scorched U.S. West Coast states, causing at least 24 deaths.

About 10 percent of the state’s population faced red “GO!” warnings to leave homes immediately, while hundreds of thousands more were under yellow “BE SET” warnings, to leave at a moment’s notice, or green “BE READY” alerts.

Towns southeast of Portland were at the mercy of wind direction and strength after two of the state’s largest wildfires merged into one in the Cascade mountains. As winds dropped and moisture levels rose on Friday, firefighters launched drones into an apocalyptic yellowish smog to see how close the flames were.

False and widely discredited claims that left-wing activists have been systematically setting fires in Oregon have goaded some residents into defying evacuation orders. https://t.co/x2eTegZOWf

America: You cannot understand the scale of devastation we’re seeing in Oregon. More than 10% of the state is under some version of evacuation orders. Our federal disaster declaration has now come through, and help can’t arrive a moment too soon.https://t.co/j1DIu8jJbf

CNN’s @CamilaBernal reports from the ground in Oregon, where deadly fires have turned the sky a hazy orange. The state has seen more than 900,000 acres burned, and more than 10% of the population is under evacuation notices. https://t.co/6NRjHOQyIa pic.twitter.com/LJjTzyt09u

Evacuation orders are given by your local law enforcement agency. If you feel threatened by a wildfire, don’t wait for an order.
Level 1 Means “BE READY” for potential evacuation.
Level 2 Means “BE SET” to evacuate.
Level 3 Means “GO” evacuate NOW https://t.co/Fcdd8i3EEo pic.twitter.com/ssYSNcL1Zi

A terrible addition to list of public health crises today |

Wildfires kill at least 10 in California; half a million in Oregon are under evacuation warning https://t.co/efFjvvsZF8