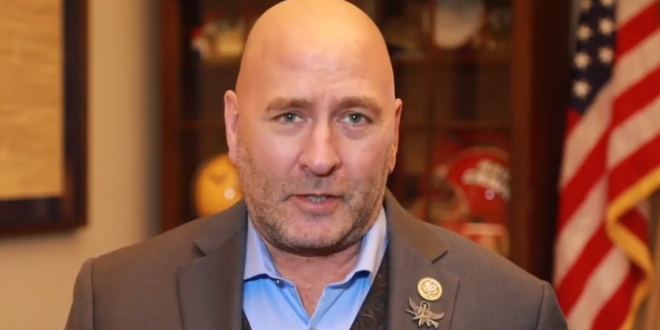 Rep. Clay Higgins (R-La.) said he’d be more than willing to shoot any armed demonstrators in Louisiana in a Facebook post Tuesday that was accompanied by a picture of Black men with guns.

“One way ticket fellas,” he wrote on his campaign account. “Have your affairs in order. Me?… I wouldn’t even spill my beer. I’d drop any 10 of you where you stand.”

“We don’t care what color you are. We don’t care if you’re left or right. If you show up like this, if We recognize threat … you won’t walk away,” added Higgins, a former police officer.

The picture Higgins attached was taken from news coverage of an armed group of protesters marching in Louisville earlier this summer to protest the killing of Breonna Taylor during a botched police raid.

Higgins is a loud champion of gun rights — including the right to openly carry firearms in public, which is legal in Louisiana — and regularly wears a handgun while in the state.

Higgins last appeared on JMG when he made a pro-military video from inside an Auschwitz gas chamber. YouTube deleted the clip after an outcry from Jewish groups.

Here’s Clay Higgins threatening to shoot on sight a Black militia rumored to be coming to LFT. And here’s the militia that showed up. Higgins appears to have deleted the post. pic.twitter.com/yfzg7iZJh4

Previous Federal Food Aid Now Arrives With Trump Branding
Next Trump Campaign Spox Defends Kenosha Killer: If You Don’t Let The Cops Do Their Job, This Is What Happens