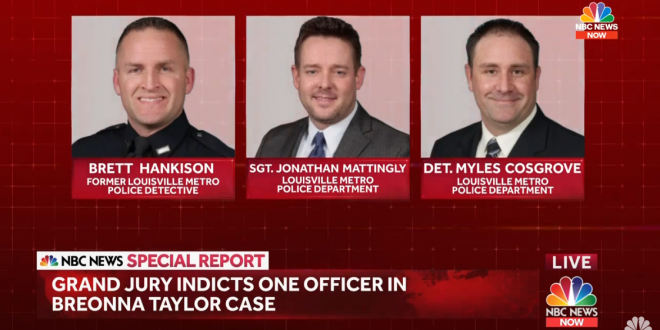 It was announced Wednesday. Former detective Brett Hankison was indicted on three counts of first-degree wanton endangerment. Sgt. Jonathan Mattingly was not indicted. Detective Myles Cosgrove was not indicted.

The announcement comes after Kentucky Attorney General Daniel Cameron’s office presented its findings to the grand jury earlier this week. His team has been investigating the Taylor shooting since May.

Louisville has prepared for the possibility of unrest from the decision. For months, protesters have criticized the length of the investigation and demanded the arrests of all officers involved.

“I urge everyone to commit once again to a peaceful, lawful response, like we’ve seen here for the majority of the past several months,” Fisher said.

The family reached a $12 million settlement with the city of Louisville earlier this month.

Jefferson County grand jury indicts former ofc. Brett Hankison Breonna Taylor's death, with 3 counts of Wanton Endangerment in 1st Degree! We urge @kyoag to accept this recommendation ASAP. While not fully what we wanted, this brings us closer to #JusticeForBreonnaTaylor. pic.twitter.com/yhtcD1FvCU

Previous Bachmann: Biden Will Turn Us Communist In 100 Days
Next Village People Frontman Threatens To Sue Media Orgs “Or Anyone Else” Who Says “YMCA” Is About Gay Sex