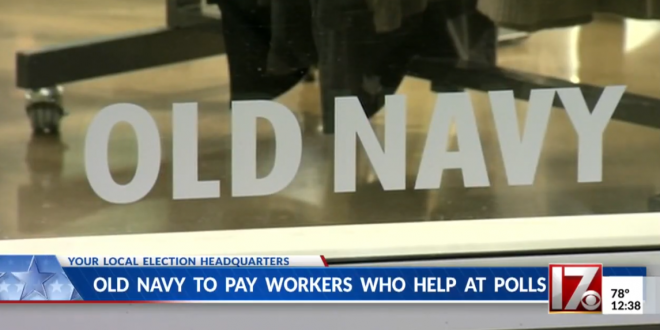 Old Navy To Pay Employees To Serve As Poll Workers

With Election Day on the horizon, many companies are giving their employees the day off to vote. But Old Navy is taking a different approach to get employees involved in the democratic process.

The retailer announced on Tuesday that it will pay store employees for eight hours who serve as poll workers for the 2020 election. The company said employees “will also be eligible for compensation from their local jurisdiction.”

Old Navy, which is owned by Gap (GPS) and has 50,000 field employees across more than 1,000 stores, is partnering with the Civic Alliance and Power the Polls to recruit 250,000 new poll workers to “ensure polling sites stay open and operate efficiently across the country.”

Old Navy will reward its employees who head to the polls to work as election judges this November with a full day of pay. On National Poll Worker Recruitment Day, the company said it will pay employees for eight hours on top of what poll workers earn.​ https://t.co/LBp59R9L3B

Old Navy is paying employees who volunteer to work the polls as election officials warn about dire shortages https://t.co/rGW39CI93G

Dangerous precedent. Now imagine #PlannedParenthood paying people to run our elections. Before the Democrats start yammering, I’ll ask them to imagine the #NRA doing the same thing. It’s wrong and it’s a threat to our democracy. https://t.co/fksphOtmuy