President Trump’s mismanagement of the coronavirus pandemic has imperiled both his own re-election and his party’s majority in the Senate, and Republican lawmakers in crucial states like Arizona, North Carolina and Maine have fallen behind their Democratic challengers amid broad disapproval of the president, according to a poll conducted by The New York Times and Siena College.

Former Vice President Joseph R. Biden Jr. led Mr. Trump by wide margins in Arizona, where he was ahead by nine percentage points, and Maine, where he led by 17 points. The race was effectively tied in North Carolina, with Mr. Biden ahead by one point, 45 percent to 44 percent.

In all three states, Democratic Senate candidates were leading Republican incumbents by five percentage points or more. Senator Susan Collins of Maine, a Republican seeking a fifth term, is in a difficult battle against Sara Gideon, trailing by five points as voters there delivered a damning verdict on Mr. Trump’s stewardship. 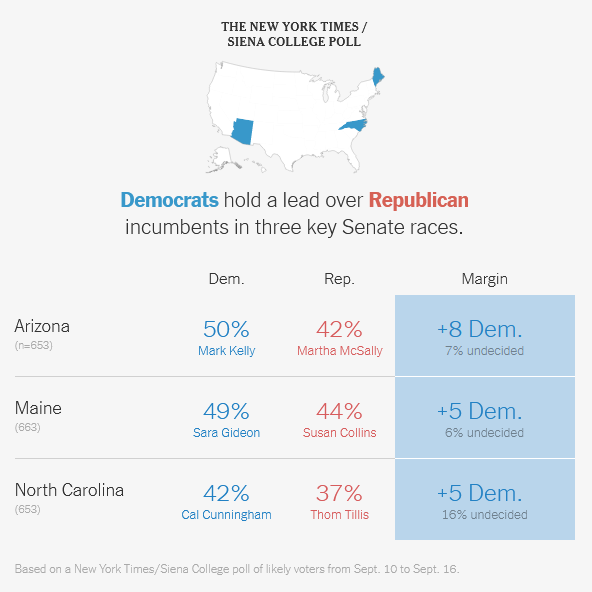 New polling by NYT/Sienna College shows Joe Biden leading Donald Trump in Arizona, Maine, and the two are about evenly matched in North Carolina. The numbers: