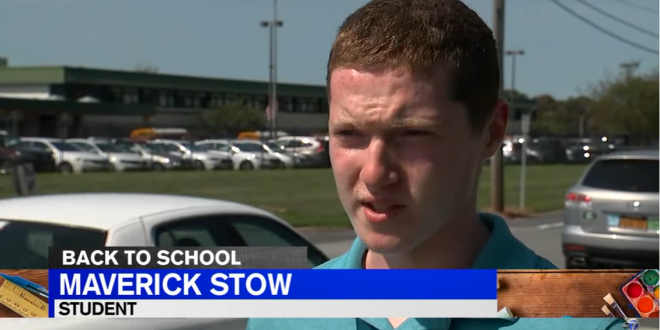 A Long Island student has been suspended for a year after repeatedly defying his school’s remote learning schedule, insisting that classes should always be held in person — even during a pandemic.

Maverick Stow, a senior at William Floyd High School in Mastic Beach, will not be allowed on school grounds for any “school-sponsored events” during his final year, including prom and graduation, officials announced Tuesday.

The 17-year-old was initially suspended for five days last week after attending in person-classes when he was scheduled for remote learning. He continued to defy school officials and appeared in person again last Wednesday and Thursday, resulting in an arrest on criminal trespass charges.

As you’ll see below, his parents are behind this. Last week’s arrest at the school took place after the family tipped off local media about the planned stunt.

Previous Bill Barr Suggests Democrats Will “Pay Off” Mailmen: “Here’s A Few Hundred Dollars, Give Me Some Ballots”
Next Alan Dershowitz Files $300 Million Suit Against CNN