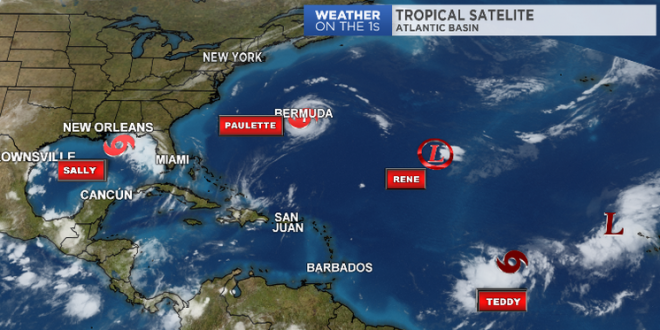 A hurricane warning has been issued for portions of southeastern Louisiana east of Morgan City, Louisiana eastward to the Mississippi/Alabama border, including Lake Pontchartrain, Lake Maurepas and metropolitan New Orleans. Hurricane conditions (winds 74 mph or greater) are expected in some parts of this area by late Monday and Tuesday.

Hurricane watches and tropical storm warnings and watches are in effect to west and east of this hurricane warning, including parts of Louisiana, Mississippi, Alabama and the Florida Panhandle.

A storm surge warning is also in effect from Port Fourchon, Louisiana, to the border between Alabama and Florida, including Mobile Bay, Lake Pontchartrain, Lake Maurepas and Lake Borgne. This means there will be a danger of life-threatening inundation from storm surge within the warning area in the next 36 hours.

Tropical Storm Teddy formed in the busy Atlantic early Monday and is expected to “become a powerful hurricane” later this week, according to the National Hurricane Center.

A new tropical depression, the 21st of the season, has also formed in the far eastern Atlantic and is expected to be short-lived, according to the hurricane center. Counting Teddy and Tropical Depression 21, the Atlantic is churning with seven systems, including Tropical Storm Sally, Hurricane Paulette, Tropical Depression Rene and two disturbances.

Tropical Storm Teddy is about 1,110 miles west of the Cabo Verde Islands and about 1,405 miles east of the Lesser Antilles early Monday. Its moving west-northwest near 14 mph with maximum sustained winds near 40 mph with higher gusts. The forecast shows Teddy making a turn toward the mid-west by mid-week.

September may be the peak of Atlantic Hurricane Season, but this is NOT typical. FIVE named/numbered systems now… Teddy is the earliest 19th named storm as of this morning. @boston25 pic.twitter.com/jLC4FK8CKY