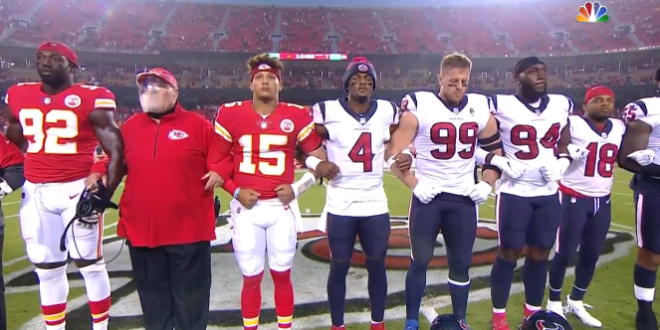 The NFL season on Thursday night got off to a dismal start, and exposed the pernicious sentiments of many in America, when some fans jeered what the league described as “a moment of silence dedicated to the ongoing fight for equality in our country.”

The incident was particularly striking because it was meant as a show of unity rather than any kind of protest with players, both black and white, linking arms. Earlier the Texans had stayed in the locker room for performances of Lift Every Voice And Sing, widely considered the black national anthem, and the Star-Spangled Banner.

Texans executive vice president of football operations Jack Easterby told NBC the players did not want “any misinterpretation of celebrating one song and throwing shade on the other.” The Chiefs allowed around 16,000 fans into Arrowhead Stadium on Thursday night despite the Covid-19 pandemic.

“The Kansas City Chiefs, when they were leading that city to a Super Bowl championship, those same fans cheered … But when players want to draw attention to the critical conditions of their communities, you’re met with boos.” – @MalcolmJenkins on the NFL’s moment of unity pic.twitter.com/SZcont2LcO

@realDonaldTrump nothing but boos heard on tv. Here’s the real audio for NFL fans. pic.twitter.com/2AhDiZAeTo