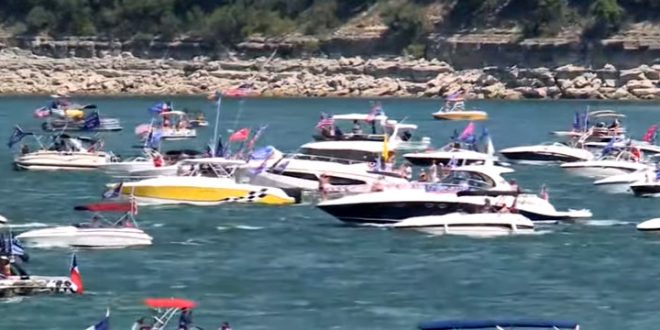 Multiple 911 calls have been made regarding boats being in distress, some sinking at the ‘Trump Boat Parade’ scheduled for Saturday afternoon on Lake Travis.

The Travis County Sheriff’s Office.confirmed with CBS Austin that multiple boats have been sinking and are in distress.

The sheriff’s office says calls have been made about boats along the entire route of the parade, some of the locations include: Paradise Cove, Emerald Point and West Beach.

BREAKING: Several boats have sunk during a boat parade in support of @realDonaldTrump on Lake Travis, @TravisCoSheriff confirms. Crews have responded to many boats in “distress.” @KVUE

Our coverage from earlier today: https://t.co/cxR08hrxYa

Breaking: Multiple boats are either in distress or have sunk on Lake Travis in Texas during a “Trump Boat Parade”, according to Travis County Sheriff’s Office. A video shows the scene of the parade earlier today. pic.twitter.com/5Q8XQLY676

Okay, who gave Antifa the nuclear submarines? Fess up https://t.co/LJkhQM0n0v

“Hello, I’d like to report an excessively on-the-nose metaphor in progress.” https://t.co/526kJJixZY

Coast Guard: Do you need assistance?

boaters: NO WE’RE NOT DROWNING THE LIBS ARE DROWNING YOU CUCKhttps://t.co/zFCNA15wCF