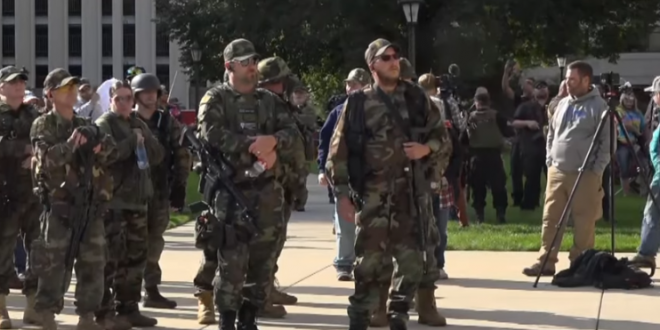 Thursday’s legislative session in both chambers was canceled, sparking criticism from some Democrats that it was a precautionary move by GOP leadership to avoid armed visitors entering the state Capitol. Session on Thursday would have coincided with the annual “Second Amendment March” event on the Capitol lawn, hosted by a slew of pro-gun groups. Open carry was encouraged and speakers touted attendees’ rights to bear arms under the Second Amendment.

The Second Amendment March was hosted by the “Second Amendment March” Facebook page, Michigan Gun Owners and Michigan Open Carry Inc. Many attendees sported pro-President Donald Trump signs and flags, “Don’t tread on me” flags and anti-Gov. Gretchen Whitmer signs like, “My Governor Is An Idiot.” Members of the Michigan Militia were present, along with members of the National Rifle Association (NRA) and the Proud Boys.

Jeff and Sheila Humphrey of Burton stood in the rotunda of the Michigan Capitol Thursday, gazing up at the inner dome more than 100 feet above them. It was their first time inside the building. They carried AR-15 firearms. “The most beautiful building I’ve ever seen,” Jeff Humphrey, 50, said. They visited Lansing as part of the “Second Amendment March,” in which participants — many of whom openly carried weapons — gathered to celebrate their right to bear arms.

The event occurred as a heated debate flared on in Michigan over whether to continue allowing guns in the Capitol building. “I don’t see any problem with any gun being in this building,” Jeff Humphrey contended. “Everything is done by a person’s intentions. So if you blame a person before they’ve done anything … what’s the point of having any rights?” “It’s not so much the guns that are killing people. It’s the people who are killing people,” Sheila Humphrey, 51, added.

Some scenes from the Second Amendment March in Lansing today: pic.twitter.com/PSSRrStV70