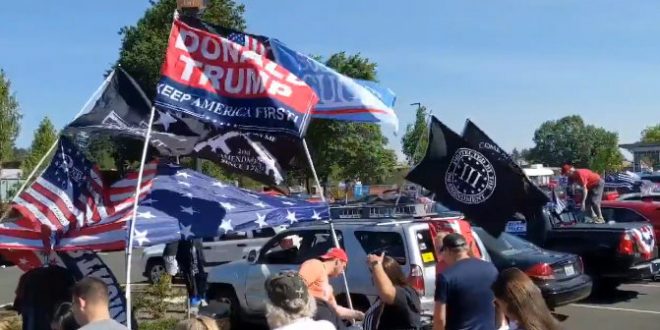 Vehicles waving flags for Trump, the QAnon conspiracy theory and in support of police gathered about noon at Clackamas Community College in Oregon City. Members of the right-wing group the Proud Boys went on to Salem, where a crowd of several dozen pro-Trump supporters had gathered.

At one point Monday afternoon, the right-wing crowd rushed a smaller group of Black Lives Matters counter-demonstrators, firing paint-gun pellets at them. There were skirmishes, and the Black Lives Matter group dispersed shortly after local police arrived on the scene.

I’m back out in the Portland suburbs, where many hundreds are gathering for another pro-Trump caravan. People are still arriving, but I’ve already seen some Proud Boys, some Qanon proponents, and folks from the Three Percenters militia group. pic.twitter.com/7XamABZvFb

All the Proud Boy vehicles have tape over their license plates. pic.twitter.com/BYz2SrdrEb

Now in Salem, where there are people on opposing sides of a street. Guns on the right-wing side and at least one bat on the left-wing side. A few Proud Boys demanded to see my credentials, and one made some threatening comments so that I would leave their side of the street. pic.twitter.com/8YS0QDP66O

The right-wing crowd crossed the street and began pursuing the left-wing crowd, knocking one guy to the ground, punching him, then spraying him with mace. pic.twitter.com/hdkBEFUYxZ

Police are pleading with the right-wing crowd, which includes many Proud Boy members, to move back to where their rally was supposed to be pic.twitter.com/vFf8FwXmCi