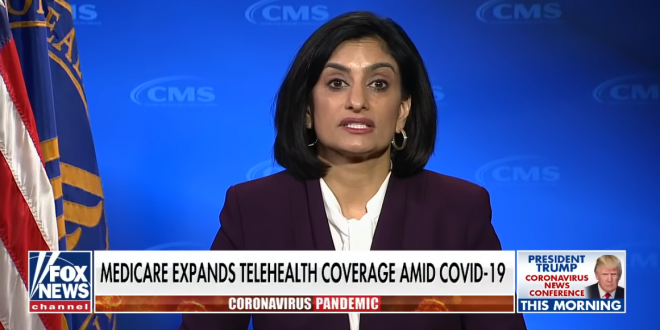 Centers for Medicare and Medicaid Services Administrator Seema Verma used millions in federal taxpayer funds to pay for communications consultants with strong Republican ties to polish her own profile, potentially violating federal policies, a new report released Thursday by House and Senate Democratic committees alleges. The new report — released jointly after a 17-month investigation — found that communications consultants billed the government rates of up to $380 per hour.

“In less than two years, Administrator Verma’s consultants charged CMS nearly $6 million for work that included boosting her public profile and personal brand, serving as her preferred communications advisors, arranging private meetings for her with media personalities and other high-profile individuals, and routinely traveling with her to events across the country,” the new report reads.

When Seema Verma, the Trump administration’s top Medicaid official, went to a reporter’s home in November 2018 for a “Girl’s Night” thrown in her honor, taxpayers footed the bill to organize the event: $2,933. When Verma wrote an op-ed on Fox News’ website that fall, touting President Donald Trump’s changes to Obamacare, taxpayers got charged for one consultant’s price to place it: $977.

And when consultants spent months promoting Verma to win awards like Washingtonian magazine’s “Most Powerful Women in Washington” and appear on high-profile panels, taxpayers got billed for that too: more than $13,000. Verma declined to comment through the health department’s top spokesperson, Michael Caputo, who described the report as “another reckless drive-by election year hit job.”

The Democrats accuse Verma of building a “shadow operation that sidelined CMS’s Office of Communications.” Her cadre of handpicked consultants charged CMS nearly $6 million in less than two years, the 56-page report alleges.

The investigation suggests that CMS “may have violated applicable law governing the agency’s use of appropriated funds” due to Verma’s expenditures on private consultants. “CMS appears to have made unlawful expenditures in violation of these conditions,” the report says.

Consultants for Verma also failed to comply with standard federal expense protocol, the report says, by providing vague descriptions on invoices and not providing dates for the work.

Verma, like virtually all Trump cronies, has been accused of violating the Hatch Act for speeches against Medicare For All. From Wikipedia:

One of her first actions was to send a letter to the nation’s governors, urging them to impose insurance premiums for Medicaid, charge Medicaid recipients for emergency room visits, and encourage recipients to obtain employment or job training.

NEW: How SEEMA VERMA’s team spent taxpayer money to boost her brand — from $2,933 for a networking “Girl’s night” to the $13,000-plus spent to promote her for awards and panels. https://t.co/x3465arIqT with @adamcancryn

Seema Verma, a Medicaid official and a member of the coronavirus task force, racked up $3.5 million in consulting charges, including nearly $3,000 on a “Girl’s Night” party and about $1,000 to place an op-ed with Fox News.https://t.co/t1TlrBbzbh

I will never tire of stories about the extravagant ways that Seema Verma (the Trump official who runs Medicare and Medicaid) spends public money for her personal aggrandizement. Her absence of shame and ability to hang onto her job are simply remarkable. https://t.co/TyZaJys9Ny