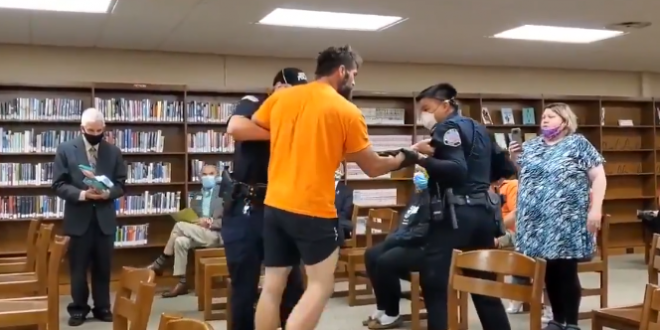 Mask Refuser Dragged Out Of School Board Meeting

A member of the public was escorted out of the Mitchell Board of Education Monday night by Mitchell Police after he refused to don a mask as per district policy that mandates mask wearing on school property. The man, whom Mitchell School District Superintendent Joe Graves identified as Reed Bender, appeared at the meeting and sat in the front row of the audience area while not wearing a mask.

Graves contacted the Mitchell Police Division, which arrived approximately 20 minutes later and also asked Bender to leave. Bender again refused, saying he would have to be physically removed from the meeting. Two officers spoke with Bender for a few minutes before attempting to escort him out of the building. Bender resisted the officers while several audience members implored Bender to not resist.

Anti-masker in South Dakota is dragged out of a school board meeting by police pic.twitter.com/1EA5REzLnF

The stupid never ends with these selfish people. He forces the police to “drag” him out, then accuses them of doing something wrong.
If only he would follow policy, none of this would have happened.