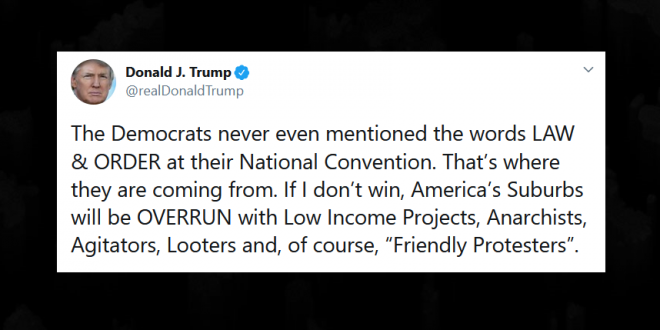 President Donald Trump raised the prospect of a dystopian future in the future if he fails to win reelection – hours after saying he held back warnings about the nature of the coronavirus to avoid sowing ‘panic.’

Trump made the claim as one of a barrage of tweets Thursday as he fended off news of the release of excerpts from Bob Woodward’s book.

Trump has repeatedly been tweeting about the suburbs this summer and fall. In July he tweeted about ‘Suburban housewives of America.’ He also has warned that low-income housing poses a risk to suburbs.

The Democrats never even mentioned the words LAW & ORDER at their National Convention. That’s where they are coming from. If I don’t win, America’s Suburbs will be OVERRUN with Low Income Projects, Anarchists, Agitators, Looters and, of course, “Friendly Protesters”.

Is this that not wanting to cause a panic thing you were talking about? Stop sending your radical right goons into our streets. You won’t even say the words radical right extremism! pic.twitter.com/nXA3ifGsUF

Sorry, Law and Order is for @JoeBiden too! pic.twitter.com/TCLLrvHWEx

Ummm, what happened to the “i didn’t want to panic people”?

You’ve mentioned the words law & order dozens of times, but you and your admin are the most LAWLESS and DISORDERLY in history.

This is also probably your most racist tweet ever. You might as well go ahead and use the N word, you wouldn’t lose ANY followers.

You don’t even try to hide your racism.

Your klansman daddy would finally be proud of you.