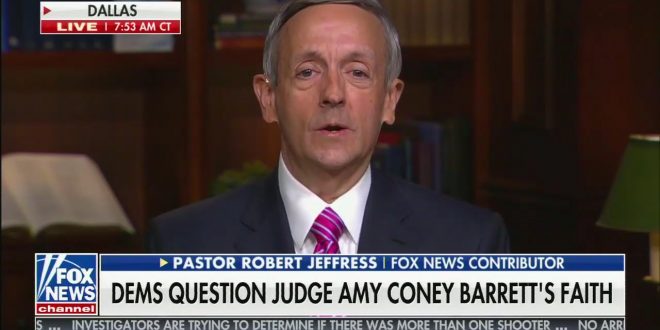 Texas megachurch pastor and Fox News contributor Robert Jeffress appeared on Fox & Friends this morning to accuse Democrats of questioning the Catholic faith of Supreme Court nominee Amy Coney Barrett. Here’s some of what Jeffress himself has said about Catholicism in the past:

And that’s what Satan does with counterfeit religion. He uses, he steals, he appropriates all of the symbols of true biblical Christianity, and he changes it just enough in order to cause people to miss eternal life.

Jeffress has said that all Jews and Mormons go to hell, that Obama was the precursor to the antichrist, that LGBTs need rescuing from Satan’s deception, that God designed the borders of the United States, that there will be civil war if Trump is removed from office, and that God gave Trump the moral authority to have foreign leaders assassinated. In April, Glorious Leader promoted his online Easter service. In July, it was revealed that Jeffress’ megachurch got up to $5 million in bailout funds. Last month Jeffress said that any Christian who votes for Biden has “sold his soul to Satan.”