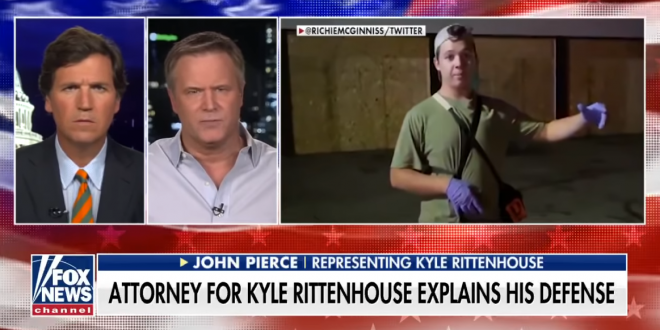 The attorney representing Kyle Rittenhouse, the 17-year-old from Antioch charged with killing two people and injuring another in a shooting during a Kenosha protest last week, claimed self-defense on Fox News Monday night. John Pierce appeared on Tucker Carlson Monday night to insist Rittenhouse was defending himself when he fired his assault rifle several times, killing two people and injuring a third.

“Kyle and his friends decided that nobody was doing anything to protect that community,” Pierce claimed. Pierce said Rittenhouse did not bring the weapon from Illinois. “That firearm never crossed state lines,” he said. “That is a legal firearm in the state of Wisconsin. Wisconsin is an open carry state. That charge is incorrect as a matter of state law.” Open carry is legal in Wisconsin for adults over the age of 18.

Previous Analytics Firm Warns That It Will Appear Trump Won By Large Margin Before All Mail Ballots Are Later Counted
Next DHS Sec: We’re Investigating Funding For Protesters