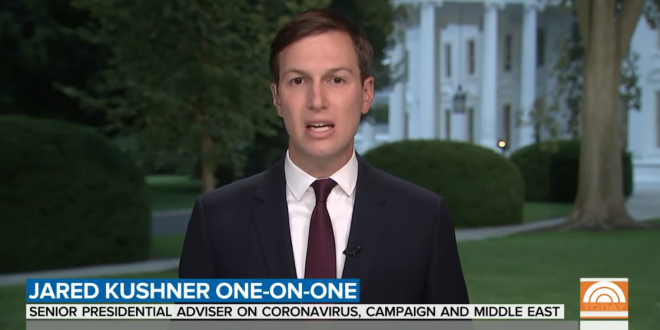 Kushner On Rallies: People Make Their Own Decisions

White House senior adviser Jared Kushner responded to tapes of President Donald Trump downplaying the threat of the coronavirus in March by saying Trump was “very forthcoming with the American people” about the dangers of the illness.

Kushner also addressed concerns over a large indoor Trump rally in Las Vegas on Sunday in which people defied the guidelines of health experts and did not wear masks or socially distance.

His comments come as the country prepares to pass the grim milestone of 200,000 deaths from COVID-19, five months after Kushner called Trump’s handling of the pandemic “a great success story.” “Look, President Trump believes that people should make their own decisions,” Kushner said about the rally. “We put out guidance for how people should follow.”

Previous Catholic Group To Spend $10M On Biden Attack Ads
Next Kanye: The NBA’s A Slave Ship And I’m The New Moses