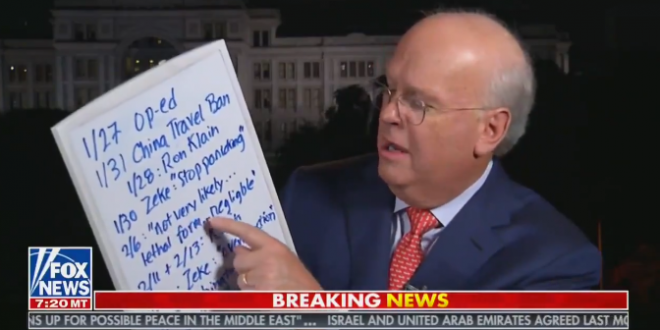 On a day when the political landscape was rocked by damning revelations from Rage, Bob Woodward’s new book, about President Donald Trump admitting that he lied to the public about the deadly risks of the coronavirus, GOP political strategist Karl Rove delivered an epic, five minute-long rant on Fox News about the disastrous, dishonest response to the pandemic…by Joe Biden.

Appearing Wednesday night on the friendly confines of Fox’s prime time show, Hannity — and just moments before the eponymous host interviewed Trump by phone — Rove pulled out his trademark whiteboard to try to prove that real negligence on Covid-19 was perpetrated by the man who was not leading the country at the time and not privy to real-time, national security and public health assessments from the U.S. intelligence community.

You don’t want to miss @SeanHannity’s segment with @KarlRove. Thank you! pic.twitter.com/579SrlBxyP

Karl Rove is a total loser. Money given to him might as well be thrown down the drain.

Karl Rove –lost GOP both Houses of Congress and the White House–gave us Obama.

@karlrove is a total loser…save your money!

If Mitch McConnell wants to win his election, he’d better get rid of jinxed Karl Rove and fast…

Karl Rove is talking with Sean Hannity about the coronavirus.

“What did Joe Biden know, and when did he know it?”

Previous USPS Board Of Governors Supports DeJoy “100%”
Next Fox & Friends Host: Trump Downplayed COVID Because He Didn’t Want People To “Freak Out” Like After 9/11