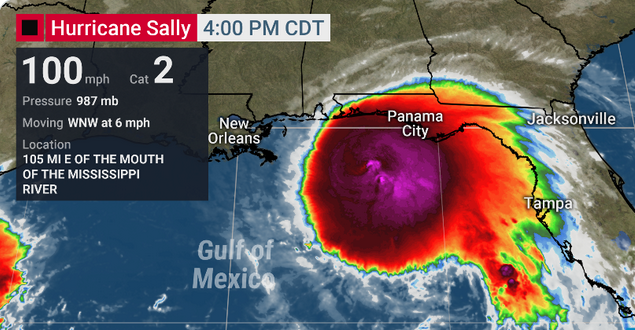 A rapidly intensifying Hurricane Sally is closing on the northern Gulf Coast, threatening Louisiana, Mississippi, and Alabama with high wind and possible flooding from storm surge and heavy rain.

Sally reached Category 2 strength with sustained winds of 100 mph (155 kph) and the potential for as much as 2 feet (0.6 meters) of rain. It is one of five storms churning simultaneously in the Atlantic.

Storm-weary Gulf Coast residents are rushing to buy bottled water and other supplies ahead of Sally. The storm is on a track that would take it past the tip of southeast Louisiana on a track toward the Mississippi-Alabama state line late Tuesday or early Wednesday.

Hurricane #Sally has now intensified into a category 2 with sustained winds of 100mph moving WNW at 6mph. Now is the time to complete preparations as tropical-storm-force winds begin moving onshore this evening! pic.twitter.com/Gy2AT5kk4z

Hurricane Sally: Here is a look at visible satellite loops through this evening as Category 2 #HurricaneSally nears landfall. Life threatening storm surge and hurricane conditions are expected to begin late tonight into tomorrow morning for portions of the MS/LA/AL Gulf Coasts. pic.twitter.com/7dN2LOf381

BREAKING: #Sally has rapidly intensified into a Category 2 hurricane. The system is forecast to make landfall along the Mississippi coast late Tuesday into early Wednesday. We have the latest details on the timing and impacts with our around-the-clock storm coverage. pic.twitter.com/awppQsZYRd