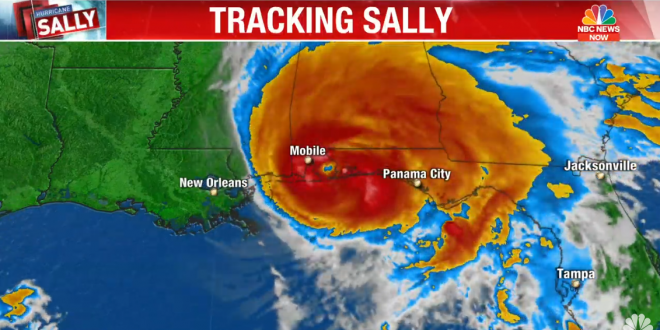 A wind gust to 86 mph was measured this morning in Pensacola, Florida. Gulf Shores, Alabama, has seen wind gusts as high as 93 mph.

Nearly 300,000 homes and businesses have lost power in southern Alabama and the Florida Panhandle, according to poweroutage.us. Storm surge flooding is ongoing near and east of where Sally’s center is crossing the coast. A storm surge of over 5 feet has been recorded so far this morning near Pensacola, Florida.

Significant flash flooding with flooded roads and homes has also occurred in numerous spots from southeast Alabama into the western Florida Panhandle. One location in Pensacola, Florida, has measured over 15 inches of rainfall so far.

#Sally has made landfall near Gulf Shores Alabama at 445 AM CDT as a category 2 hurricane. Maximum sustained winds were 105 mph with a minimum central pressure of 965 mb. More: https://t.co/tW4KeFW0gB pic.twitter.com/zdyilBhdic

Sally’s landfall comes with storm surge, hurricane-force winds and EXTREMELY heavy rainfall. Gulf Shores and Pensacola may get 20-30″ of rainfall when this is all said and done. https://t.co/JDCE2pVTuQ #tnwx #WBBJ pic.twitter.com/7tdeI0jGXS