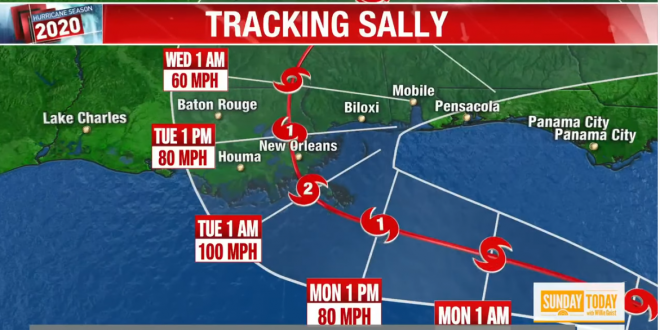 Tropical Storm Sally is expected to strengthen into a hurricane and bring an extremely dangerous storm surge, flooding rainfall and damaging winds to the Gulf Coast beginning on Monday.

Sally could produce the deadly duo of human-height storm surge and a foot or more of rainfall in parts of Louisiana and Mississippi. Nearly 90% of deaths caused by hurricanes are the result of a combination of rainfall flooding, storm surge and rip currents.

A hurricane warning has been issued from Morgan City, Louisiana, to Ocean Springs, Mississippi, including Lake Pontchartrain, Lake Maurepas and metropolitan New Orleans. Hurricane conditions (winds 74 mph or greater) are expected in some parts of this area by late Monday.

BREAKING: A pronounced shift in Sally’s track has put metro New Orleans in the center of the storm’s projected path.

Sally is also forecast now to be a Cat. 2 hurricane at landfall. https://t.co/8yMLetZ1MD

Previous RNC Chair: History Will Vindicate Trump On Pandemic
Next Strzok: I Still Think Trump Is Compromised By Russia