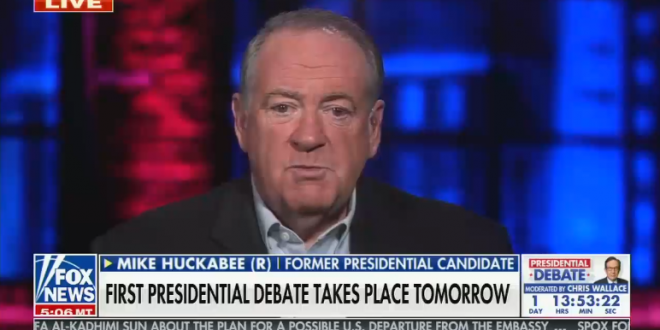 Huckabee On NYT Bombshell: So What? Who Cares? I Didn’t Elect Trump To Be My Tax Accountant [VIDEO]

“Well first of all, it’s The New York Times. I’ll tell you what I make of it, is when The New York Times says something about Donald Trump, I kind of blow it off as totally lacking in credibility. Because how many hours, I wonder, have they spent? And what are their documents for this? They don’t tell us.

“But let me give you this. So what? In a big business operation like he runs, there is a good likelihood that with all of the various business losses that he had from running for president when he wasn’t overseeing his business, maybe that’s so. I don’t know. Frankly, I don’t care.

“I didn’t elect him to be my tax accountant. I elected him to be president, and I’m really happy with the job that he’s doing. And when The New York Times blows this horn, you know, I’ve just got a complete hearing loss for it.” – Fox News contributor Mike Huckabee.

Previous Dem Super PAC To Spend Millions Against Graham
Next Police Say Brad Parscale’s Wife Had Been Beaten, Called 911 After Hearing Him Fire Weapon Inside Their House