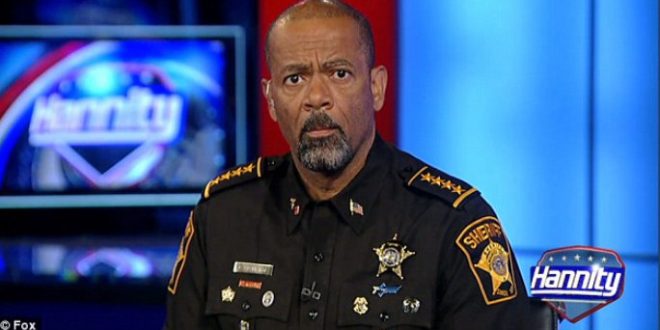 Former WI Sheriff David Clarke To Would-Be Vigilantes: “Have A Plan, You’ll Have To Articulate What You Did”

“The question is when is government going to do something? Inaction is not a plan. You know what happens with inaction? People take the law into their own hands.

“Government is leaving them no choice. No choice. I don’t advocate for some of the stuff that’s starting to happen, but I am certainly done — I am through with condemning it. I’m done with that.

“I’m just telling people, ‘Hey, you’re on your own.’ Think about it, have a plan. Act reasonably. You have to act reasonably. Then you’re going to have to articulate what you did afterwards.

“But you can’t have government officials and law enforcement executives telling people, ‘Do not take the law into your own hands.’ Well, you’re forcing them to!” – Former Milwaukee County sheriff David Clarke, speaking on local talk radio.

Previous Pharma Lobby: Trump Lied, We’re Not Meeting Him
Next MO Radio Host Pulled Off Air After Slur Against Kamala