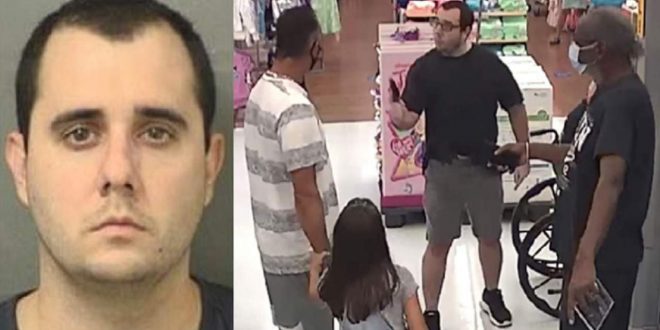 FLORIDA: No Charge For Man Who Pulled Gun And Threatened To Kill Shopper Over Face Masks [VIDEO]

The 28-year-old man who pulled a gun on another customer at Walmart in July during an argument over face masks is no longer facing charges.

Court records show that the State Attorney’s Office didn’t file charges against Vincent Bruce Scavetta, saying that although there was probable cause to arrest him, the current evidence doesn’t prove all the “legally required elements” of the crime he’s accused of and isn’t sufficient enough to support a criminal prosecution.

Scavetta was arrested in early July for aggravated assault with a deadly weapon and improper display of a firearm for pulling a gun on a shopper and his daughter after the shopper said Scavetta should be wearing a mask, according to investigators. The incident had been caught on surveillance video.

New, and with video: The Palm Beach County State Attorney's Office will not file charges in the July 12 incident where a man pulled a gun during a dispute over face masks at the Royal Palm Walmart. Yes, stand-your-ground is in play https://t.co/vwIkfpMqeX

MASK DISPUTE: An unmasked man pulled a gun on a masked shopper and threatened to kill him during an apparent confrontation over masks at a Florida Walmart store, sheriff’s officials said. https://t.co/3VaMvCd6zP