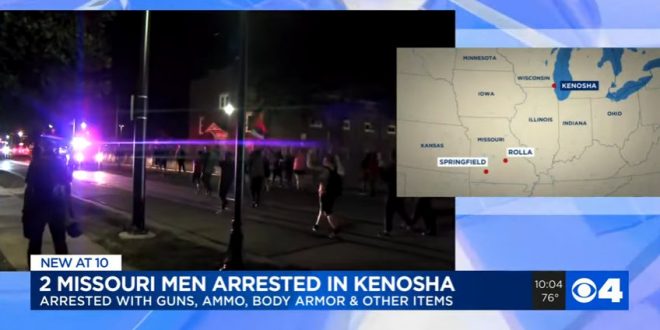 Two Missouri men were arrested on firearm charges after a tipster warned law enforcement the pair were traveling to Kenosha, Wisconsin, with assault-style weapons, according to court documents.

Michael M. Karmo, 40, and Cody E. Smith, 33, were arrested at a hotel near Kenosha on Tuesday and charged with illegal possession of firearms, the Department of Justice announced Thursday.

According to the criminal complaint against them, they were found with a major cache of firearms and weapons in their vehicle and hotel room that included an AR-15, a shotgun, handguns, a dagger, a saw and magazines.

Karmo has prior felony convictions. Smith has a prior misdemeanor domestic battery conviction and acknowledged regular drug use. Consequently, both Karmo and Smith were prohibited from possessing firearms and ammunition on September 1, 2020.

According to the criminal complaint, the Kenosha Police Department advised FBI that a law enforcement agency in Iowa had received a tip that the pair were traveling to loot and possibly “pick people off.”

Smith told FBI agents he and Karmo traveled from Missouri to Kenosha for the President Trump rally on Sept. 1. Smith said they went to the rally outside of the high school in Kenosha.

FBI agents interviewed Karmo who said he and Smith have been roommates in Hartville, Missouri, for about four weeks. They worked together and are part of the ‘417 Second Amendment Militia’.