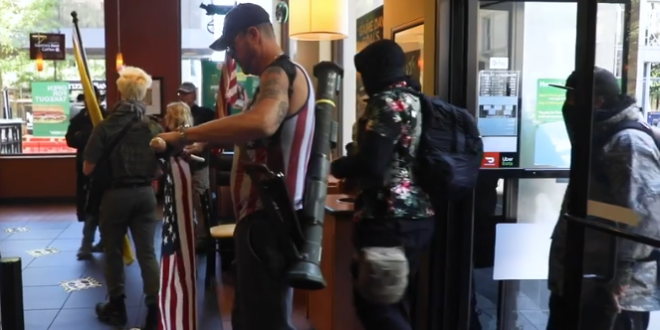 Photos of members of an anti-government group carrying long guns, a pipe wrench, and an inert rocket launcher into a Subway restaurant in Raleigh went viral in May. Now, one of those people has been accused of trying to sell weapons to undercover federal agents.

Benjamin Ryan Teeter, 22, from Hampstead, NC, and Michael Robert Solomon, 30, from New Brighton, Minn., were arrested and charged with conspiring and attempting to provide material support to Hamas, a Palestinian terrorist group.

“Michael Solomon and Benjamin Teeter proclaim themselves to be members of the Boogaloo Bois, a group that espouses a violent ideology and an objective to overthrow the government,” said U.S. Attorney Erica H. MacDonald in a news release.

Remember the heavily armed insurrectionists who showed up at a Raleigh-area Subway in May? Two of those men are now accused of attempting to sell gun parts to Hamas; they wanted to be “mercenaries” to earn money to support the Boogaloo movement. #ncpol https://t.co/AGcsxpuGpR