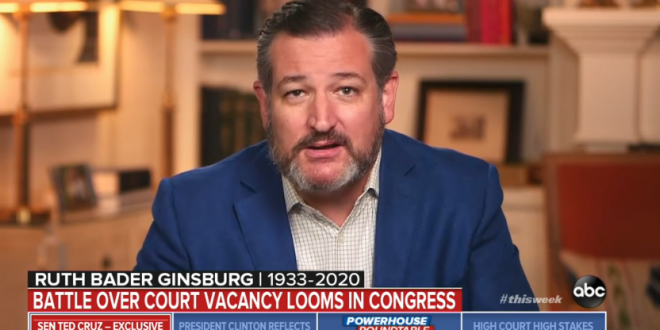 Twenty years ago, I was part of the legal team that litigated Bush v. Gore and went to the Supreme Court. For thirty-six days, the country did not know who the president was going to be, and if we had had a four-four court it could have dragged on for weeks and months. In the midst of deadly pandemic, economic devastation, and violent riots erupting across the country, that is the last thing the American people need.

As I wrote in my forthcoming book, “One Vote Away—How a Single Supreme Court Seat Can Change History,” every single vote on the Court matters in every major case the Court hears. There is no room for error. On too many issues, we are one vote away. This could very well be the case come November, and we need to do everything we can in the Senate to be ready for that possibility.

“I have to stop you there. As you know, it’s President Trump who’s been talking about rigged elections,” and both campaigns hired legal teams, @gstephanopoulos says after Ted Cruz floats possible “constitutional crisis” if Biden challenges 2020 results. https://t.co/jn2LmorOgi pic.twitter.com/2o5OpmxqSE

“I don’t know … I believe we will, ” Sen Ted Cruz tells @gstephanopoulos when asked if Senate GOP have a the votes to confirm a Trump SCOTUS nomination ahead of Nov. 3 election, adding it’s “important” to fill the seat if there’s a contested election. https://t.co/jn2LmorOgi pic.twitter.com/3PldWEphI3

Sen. Ted Cruz opposed filling a SCOTUS vacancy in 2016 — an election year when Barack Obama was president.@gstephanopoulos: “Is it fair for people to conclude right now that you’ve changed your tune because the president is a Republican, not a Democrat?” https://t.co/3fWitrDGbf pic.twitter.com/UzcpH1xckq