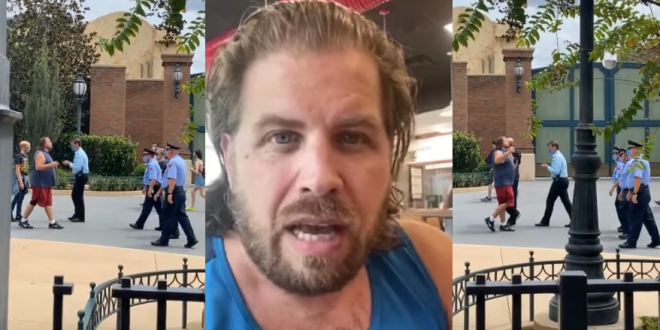 A man has been banned from Walt Disney World property after failing to comply with the company’s mask requirement, according to a video he posted on Facebook. “I’m kind of challenging this mask thing right now,” Roy Fields said in a Facebook video he streamed live from Disney’s Hollywood Studios this week. Fields runs a Lakeland-based ministry, called Run With Fire Ministries.

Face coverings are required at Disney’s theme parks and resort. Fields wore a mask to enter the park, he told 8 On Your Side, but removed it when it became hard to breathe. He said he has asthma. Deputies were called after Fields refused to comply with the company’s rule. Fields went viral earlier in the month when he posted a 9/11 conspiracy video on his Facebook page. The video has been shared more than half a million times.

I mean, if the rules say you need to wear a mask. Just wear the darn mask. This dummy going all Karen at Disney Hollywood Studios. pic.twitter.com/zkKFw5TiAz

Man Kicked Out of Disney World for Refusing to Wear Face Mask- And Starting a Bug’s Life Revolution?https://t.co/zbamy8VUA0 pic.twitter.com/49ww3QxK3n

Previous White House Demanded Drug Makers Pay For $100 “Trump Cards” To Be Sent To Seniors Ahead Of Election
Next 41% Of QAnon-Aware Republicans: It’s Good For USA