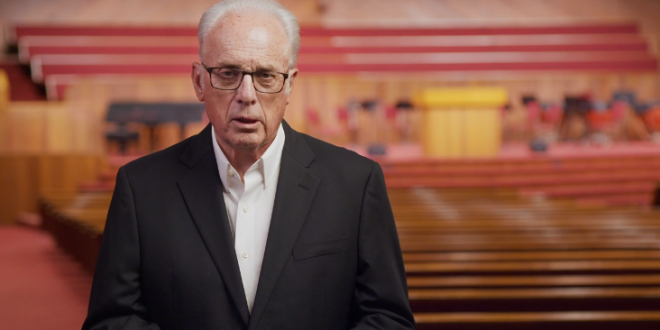 A California court has issued a preliminary injunction against Pastor John MacArthur and Grace Community Church, banning them from conducting, participating in or attending any indoor worship services until the case is resolved.

In what lawyers for the Sun Valley-based megachurch described as a “setback,” a Los Angeles County Superior Court judge on Sept. 10 granted the county’s request for an injunction prohibiting Grace Community from holding indoor services in violation of county health orders.

Judge Mitchell L. Beckloff ruled that the church must not conduct any outdoor worship services unless it fully complies with the county’s mandates relating to physical distancing and face coverings, according to the nonprofit law firm Thomas More Society.

Yesterday MacArthur and his smug, smirking lawyer (who also works for Trump) appeared on Fox to scream about a “homosexual revolution.”

We’re absolutely and exactly where we would expect to be if you had 30 years of trying to destroy morality. If you had 30 years of a sexual revolution, a homosexual revolution, and you thought you were going to be able to stop it at some point and say “well that’s far enough, go no further,” that’s just not possible. The slide is greased, and it’s rapidly going downhill at a warp speed.

PREVIOUSLY ON JMG: Las Angeles County seizes parking lot of Grace Church. John MacArthur says God made it hot on a Sunday so people would defy the lockdown and be “inside and unmasked” in his church. MacArthur says gay people do not exist. MacArthur signs petition condemning churches that advocate for social justice. MacArthur declares that Christianity which isn’t “offensive” about homosexuality isn’t really Christianity at all. MacArthur signs statement declaring that Jesus hates people who don’t hate LGBTs.