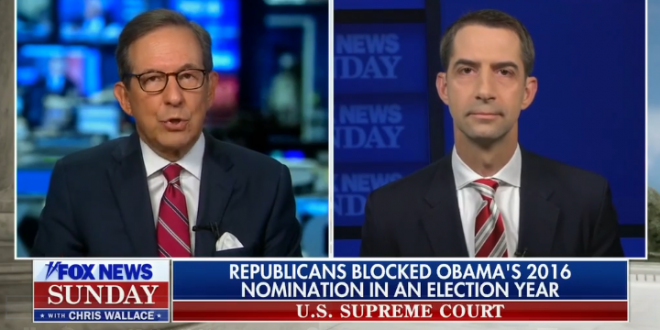 Fox News’s Chris Wallace pressed Sen. Tom Cotton on Sunday on whether there is “any hypocrisy” between the Arkansas Republican’s 2016 comments to avoid a Supreme Court justice confirmation ahead of an election and his current view to “move forward without delay.”

Cotton told “Fox News Sunday” that the GOP-led Senate has a “mandate to perform our constitutional duty” and fill the Supreme Court vacancy after Justice Ruth Bader Ginsburg’s death on Friday.

Wallace then replayed Cotton’s remarks on the Senate floor in 2016 when the Arkansas senator asked: “Why would we squelch the voice of the people? Why would we deny the voters to weigh in on the makeup of the Supreme Court?”

The Senate will do its constitutional duty.

We will process the president’s nomination for SCOTUS and conduct thorough and deliberate hearings.

We will move forward without delay. https://t.co/QRQ67JD0yj