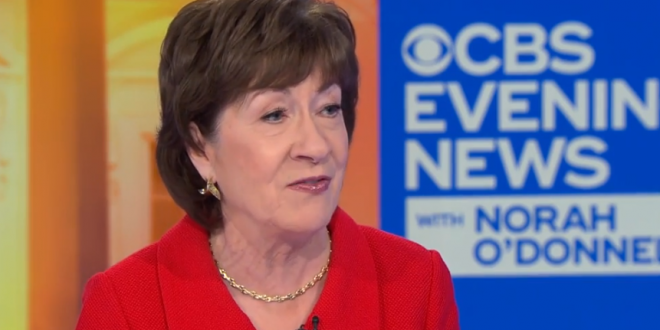 Collins: Vacancy Should Be Filled By Election Winner

“In order for the American people to have faith in their elected officials, we must act fairly and consistently – no matter which political party is in power.

“President Trump has the constitutional authority to make a nomination to fill the Supreme Court vacancy, and I would have no objection to the Senate Judiciary Committee’s beginning the process of reviewing his nominee’s credentials.

“Given the proximity of the presidential election, however, I do not believe that the Senate should vote on the nominee prior to the election.

“In fairness to the American people, who will either be re-electing the president or selecting a new one, the decision on a lifetime appointment the Supreme Court should be made by the president who is elected on November 3rd.” – Sen. Susan Collins.

My statement on the Supreme Court vacancy: pic.twitter.com/jvYyDN5gG4

Of course, this does not say what Susan Collins would do if a vote on Trump’s nominee came to the floor before 11/3, or during a lame duck if he is not elected. https://t.co/U80ctnKL1e

Mixed message here. Collins says a vote should not happen prior to the election (instead of inauguration). But then says the winner on November 3rd should make the decision on a lifetime appointment. https://t.co/UpFnFSUEpj