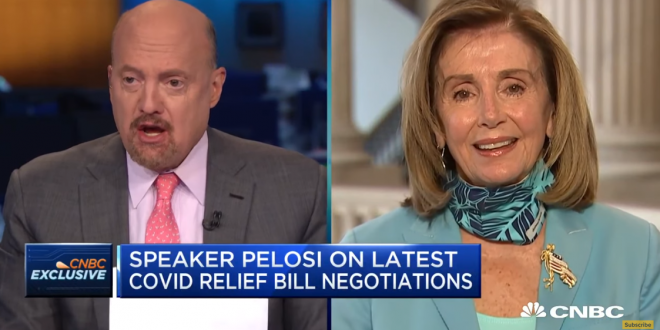 The outlandish host of “Mad Money” and former hedge fund manager was interviewing Pelosi on stalled negotiations on a fourth coronavirus stimulus package when the insult appeared to slip out.

“What deal can we have, Crazy Nancy — I’m sorry, that was the president,” Cramer said, scrambling to fix the situation. “I have such reverence for the office, I would never use that term.” Pelosi (D-Calif.) kept her composure but looked less than pleased, telling Cramer: “But you just did. But you just did.”

This is the end of Jim Cramer as a serious finance commentator. He might as well hang it up and go to work for Fox. https://t.co/tJTkqG6A89

Trump has decimated civility and dragged all of us down with him. Example: CNBC’s awful Jim Cramer calls Speaker Pelosi “Crazy Nancy” to her face, as if that’s ok to say to the Speaker of the House.

Hey @jimcramer. The smart money is buying puts on you little buddy. I think you just jumped the shark and I’m betting you’re gone by Friday. @CNBC.

I challenge anyone to listen to the interview and think i wasn’t imitating what the president says and how repulsive i find it.. I said that three times. I apologized for the implication twice. Who put out the quote without the context? what organization?

i am astonished that the president calls her that..Go call for my firing. And then go listen to the tape. https://t.co/A1HQHr5YCE