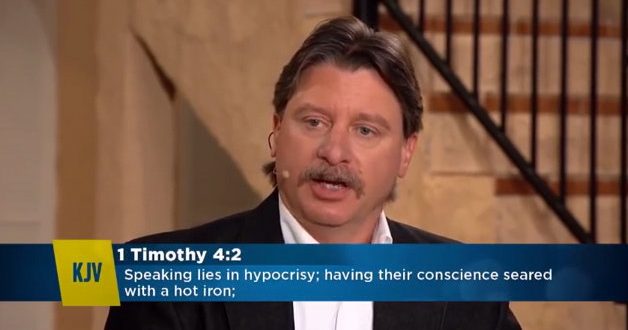 “When you see Hillary or the Queen wearing purple, that’s end of the world programming. If they’re wearing green, it means this. If they put out something verbatim like on Twitter, it activates the code, so maybe assassination codes, so maybe other codes.

“All these teachers are doing it in daycare, they’re doing elementary, junior high, high school. Churches are doing it.

“Now with all these guys in the streets, this is why they can’t be reasoned with,. You can’t reason with someone that’s been mind controlled. Do you notice the guys in the streets with the umbrellas? Those are their handlers. That activates the programming.

“What that does, the umbrella reminds them and activates the violence programming, saying that, ‘If you don’t get violent, we will activate the tormenting spirits that we have placed in you to torment you until you do.'” –  Mark Taylor, QAnon nutbag and  self-proclaimed “prophet.”

RELATED: In 2018 Jerry Falwell Jr.’s Liberty University released a film based on Taylor’s “prophetic vision” that Trump would be elected. According to Box Office Mojo, the film grossed only $671K despite heavy promotion among evangelicals and its relatively wide release to over 600 theaters. Taylor regularly appears on Jim Bakker’s slop bucket show.

PREVIOUSLY ON JMG: Mark Taylor says COVID is a cover story so Trump can make mass arrests. Mark Taylor says Christians should arm themselves because the Red Cross is kidnapping people to eat them. Mark Taylor says liberals created Hurricane Dorian as a false flag. Taylor says Ruth Bader Ginsburg “has got to be a pedophile.” Taylor says God will smite you for mocking him. Taylor says Trump Junior will run for president with JFK Jr., who faked his 1999 death in a plane crash. Taylor claims that the Democrats winning the House in the midterms was actually a voter fraud sting operation. Taylor claims “demonic Eric Holder” is using mind control on Twitter to activate assassins to kill Trump. Taylor claims Democrats created Hurricane Michael to help “communist” Andrew Gillum suppress votes in Florida’s panhandle. Taylor claims liberals created Hurricane Michael as retaliation for Kavanaugh’s confirmation. Mark Taylor claims liberals created Hurricane Florence to wash away evidence of voter fraud in North Carolina. Taylor claims that John McCain was secretly executed for treason by a military tribunal on Trump’s orders. Taylor predicts that liberals will create hurricanes during the midterms to suppress pro-Trump voters. Taylor predicts that God will have former presidents executed for daring to criticize Trump. Taylor declares that Trump will release the secret cures for cancer and Alzheimer’s during his second term. Taylor reveals that Freemasons are using a secret frequency to make people hate Trump. Taylor reveals that God personally gave him a secret prayer that “jams the radar” of Democrats.