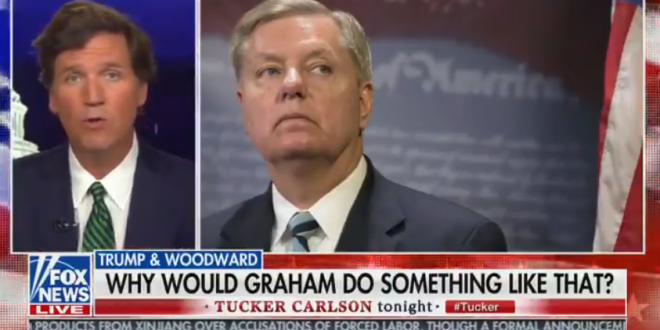 Carlson Blames Lindsey Graham For Woodward Book: He’s Supposed To Be A Republican, Why’d He Do That?

“Woodward works for Jeff Bezos’s personal newspaper, the Washington Post, which has made defeating Donald Trump its all-consuming mission, so of course Bob Woodward’s book is exactly what you thought it would be.

“What’s surprising is that Donald Trump participated in making the book. The president sat for repeated interviews with Bob Woodward. Why in the world would he do that?”

“Well tonight, from a source who knows the answer to that mystery: Senator Lindsey Graham of South Carolina. It was Lindsey Graham who helped convince Donald Trump to talk to Bob Woodward.

“Lindsey Graham brokered that meeting. Lindsey Graham even sat in on the first interview between Bob Woodward and the president. How’d that turn out?

“Now remember, Lindsey Graham is supposed to be a Republican, so why would he do something like that?

“You’d have to ask him, but keep in mind that Lindsey Graham has opposed — passionately opposed — virtually every major policy initiative that Donald Trump articulated when he first ran from ending illegal immigration, to pulling back from pointless wars, to maintaining law and order at home.

“Lindsey Graham was against all of that more than many Democrats. So maybe you already know the answer.” – Tucker Carlson, last night.

BREAKING! Tucker Carlson is throwing Lindsey Graham under the bus over the Trump Woodard interview. pic.twitter.com/OewJ48pDMR

The only thing crazier than Tucker Carlson blaming Lindsey Graham for the DEVASTATING 18 interviews with Bob Woodward, is the fact that they’re not even holding trump responsible for his own actions — just that he was stupid enough to get caught saying it out loud.