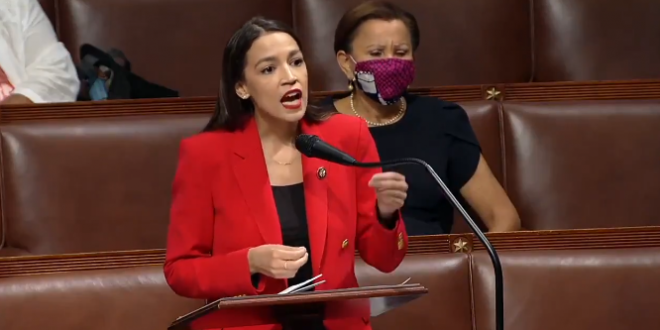 AOC On Ginsburg: “Let This Moment Radicalize You”

Rep. Alexandria Ocasio-Cortez (D-N.Y.) is urging her social media followers to let Ginsburg’s death “radicalize you” ahead of the November election. In an Instagram live video Friday night, the freshman lawmaker with celebrity status said the Supreme Court vacancy underscored what is at stake in November.

“Let this moment radicalize you,” Ocasio-Cortez said. “Let this moment really put everything into stark focus because this election has always been about the fight of and for our lives. And if anything, tonight is making that more clear to more people than ever before.”

She also cited McConnell’s intention to put a Trump nominee on the court rather than wait until the next president is elected, as Ginsburg urged shortly before her death. “If Mitch McConnell is not going to honor RBG’s final wish, we will,” Ocasio-Cortez said.

We have lost a giant in the history of our nation with the passing of Ruth Bader Ginsburg.

It is heartbreaking that in her final moments she was, as are many others, preoccupied with what would happen after her passing.

I want to make one thing clear: we can, and must, fight. https://t.co/QEDDFtSwmK

Previous Kelly Could Be Seated In Time To Vote On Vacancy
Next Fox Quisling: RBG Would Want Speedy Replacement