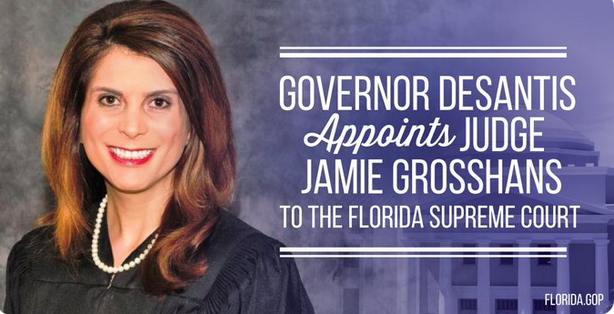 Jamie R. Grosshans, the last-minute choice of Gov. Ron DeSantis to the Florida Supreme Court, is an anti-abortion defender who has been active in a number of Christian legal groups, including a powerful national organization whose mission is to “spread the Gospel by transforming the legal system.”

She left out some details on her application: specifically her membership in the Alliance Defending Freedom and her 2011 work with Orlando attorney John Stemberger to prevent a young woman from having an abortion.

Stemberger, you may recall, once declared that he would be willing to die to stop same-sex marriage. Hit the link for much more.

Congratulations to Judge Jamie Grosshans on her appointment to the @FlCourts. She will faithfully apply the law as it is written and will not legislate from the bench. Great pick by @GovRonDeSantis! pic.twitter.com/59RcqJxmgl

Jamie Grosshans was unable to answer “no” to the question on the FLSC application that asks if she’s a member of an org/club that discriminates. Grosshans also proudly represents fake clinics, pro bono.🤦‍♀️ https://t.co/6oxHq3SdTr