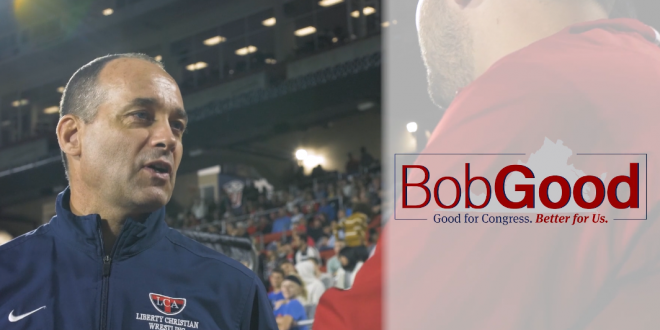 Virginia Republican Bob Good dropped his first congressional campaign ad Monday, showing Cameron Webb, his Democratic opponent, against images of rioting in an unidentified location and trying to paint Webb as a “radical” who supports forced government health care and defunding the police. The Democratic Congressional Campaign Committee condemned the ad as a “racist dog whistle.” Webb, who if elected would be the first Black doctor ever to serve in Congress, called it a “gross distortion” of his positions.

The 30-second ad begins with fiery images and a theatrical voice saying, “Webb would support defunding the police while crime spikes,” an attack that echoes attempts by President Trump to link Democratic presidential nominee Joe Biden to urban violence and unrest. It continues by warning that Webb would “force you into government-run health care.” As slow-motion clips show Webb in his white doctor’s coat and stethoscope, the campaign warns viewers to “look past” Webb’s “smooth presentation.”

Good, a former Liberty University official, won the GOP House primary in June with a campaign based on attacking the GOP incumbent for having officiated the same-sex wedding of a staff member. Last month Good’s campaign announced a rally against LGBT rights with Virginia clergy.

Let’s say it plainly, this #VA05 ad is a racist dog whistle running because Bob Good knows he can’t explain why voters should trust him over Cameron Webb to keep them safe during COVID-19. https://t.co/yFYkSjRVL4