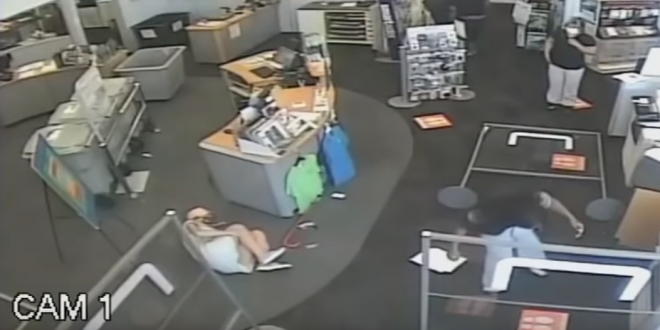 A liver transplant recipient suffered a fractured left tibia after she was thrown to the ground on Wednesday by a woman at Staples after asking her to put her face mask on, police said.

Police are searching for the suspect who assaulted 54-year-old Margot Kagan at the Hackensack Avenue Staples, said Capt. Darren DeWitt. Kagan was using one of the copiers/fax machines at Staples when she asked a woman who went to use a nearby machine to pull her mask over her mouth, DeWitt said.

Security footage of the incident shows the suspect knocking the cane from Kagan’s hand, then grabbing Kagan’s arm and throwing her to the ground. Kagan appears to hit her head on a counter in the faxing area as she fell.

Police are seeking the assailant. From the video, it appears that no customers or employees immediately came to the victim’s aid.

Previous PA Man Shot At Cigar Store Clerk In Mask Dispute
Next Axios: Trump Has Microsoft/TikTok Deal “On His Desk”