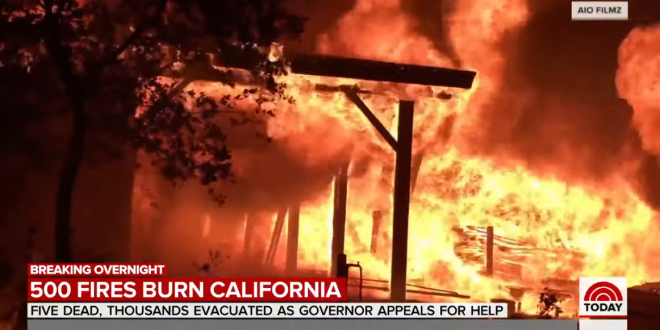 Dozens of wildfires have scorched nearly one million acres across California as officials scramble for aid to contain the raging blazes. Nearly 12,000 firefighters are actively combatting more than 20 fires, each made up of several blazes, as Governor Gavin Newsom seeks support from neighboring states and emergency services across the US and abroad.

“These fires are stretching our resources, stretching our personnel,” the governor said on Friday. “And not one governor has not been responsive.” Ten states have supported California with additional fire crews and aircraft dropping water and flame retardants. But Governor Newsom has urged additional support from the federal government.

The fires were sparked by lightning. Cooler, more humid weather overnight helped firefighters make ground against the fires but the National Weather Service issued a fire weather watch from Sunday morning into Tuesday for the entire Bay Area and central coast.

Even as the fires grow further, forecasters with the National Weather Service’s Bay Area office warned that there could be more dry thunderstorms this weekend, potentially bringing a dangerous combination of lightning and wind to an already-burning region.

Many of the current fires were ignited during an extraordinary period of more than 12,000 lightning strikes last weekend, what fire officials have called a “lightning siege.” They have now burned a size of land larger than Rhode Island.

Previous McSally: “Fast A Meal” So You Can Give Me The Money
Next Lara Trump: Unlike “Dark, Dismal, Depressing” Dem Convention, Ours Will Be Hopeful And Patriotic [VIDEO]