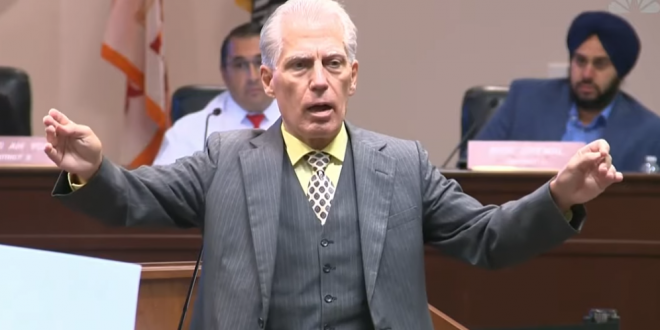 Organizers behind 2019’s “Straight Pride event” in Modesto are planning a comeback in 2020. The National Straight Pride Coalition announced the second annual Stanislaus County Straight Pride Event for the end of August, touting many of the same beliefs that stirred commotion among some Modesto residents in 2019.

Don Grundmann, organizer for the event and founder of the National Straight Pride Coalition, said his organization is holding the event at Planned Parenthood to protest what they believe is a negative impact the organization has had on the Black community in regard to abortions.

“We have a celebration of life in all of its aspects: masculinity; femininity; the natural family of man, woman, and children; children born and unborn; Western civilization; Christianity – everything which builds the culture of life,” Grundmann said.

Grundmann, as I reported last year, is a locally infamous Christian white nationalist and political gadfly.

From a now-deleted entry on his site:

Western Civilization (“the West is the Best”) – the Christian religion based social, cultural, and national cornerstone upon which the mass majority of all progress of humanity; i.e.; the modern world; has been built;

Whiteness/Caucasian – the mass majority biological racial component of the developers of western civilization;

Christianity – the religious foundation of the formation, development, and advancement of Western Civilization;

Nationalism – the patriotic love of their nation and its interests, principles, and future that motivated the formulators of and in the development of Western Civilization.

From the current site:

These pathologies are promoted to children at the youngest ages possible in order to, following the example of the ” North American Man-Boy Love Association ” (NAMBLA) whose motto is “sex before 8 or it’s too late,” destroy them so that recovery to sanity can never occur.

Hence we both thank our supporters and volunteers and pledge to continue the long battle which we have barely begun to both eliminate The Shadow of PP institutionalized racism and genocide upon our land and to protect current and all future generations from attack by the LGBT War Machine.

“Straight Pride” is hence on the frontline of the Religious War between Christianity and its Satanism/Humanism opponent. Our standard bearer is Jesus Christ while the standard bearer of Satanism/Humanism is the Marquis De Sade. We represent the Culture of Life while our Satanist/Humanist opponents represent the Culture of Death.

As you can see below, recruited as the event’s “grand marshal” is far-right radio host Jesse Lee Peterson, who recently appeared on JMG for claiming that depression is caused by “sinning” and for declaring that “all Asians look the same to me.” During last year’s Democratic primaries, Lee called for sending Andrew Yang “back to China.” 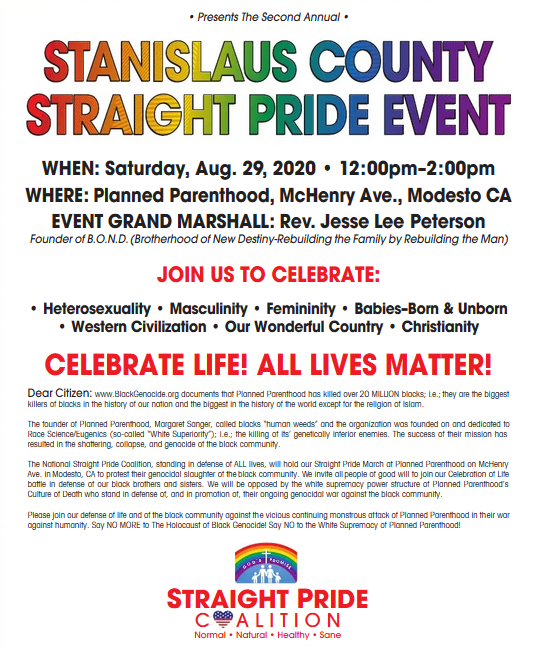