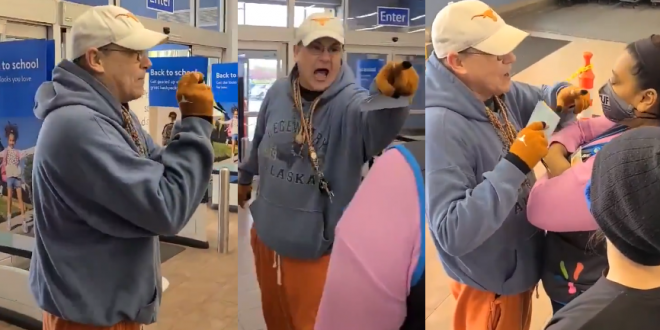 VIRAL VIDEO: Covidiot Booted From AK Walmart After Shouting That Face Masks Are In The “Service Of Satan”

A new video has gone viral on social media showing someone going on a rant about mask-wearing, this time at a Walmart in Alaska. This incident began when the individual became belligerent and was asked to leave the store. The video begins with the individual, who is wearing orange Texas Longhorns pants, yelling at other customers, “Get back on your highway to hell and get out of a godly man’s face.”

He also says, “By your very blind ignorance, you don’t have the ability to even come up with your own fucking ideas.” A few voices of employees off-camera can be heard asking him to leave, to which he responds, “I will leave when I choose.” The man also tells them as he’s walking off, “Please, return to your service of Satan and your ignorant belief in your rights.” At one point, he gets within inches of an employee and yells in her face.

The clip has 6 million views at this writing.

Anti-masker in Alaska gets kicked out of Walmart & has a public meltdown pic.twitter.com/wymrh10XZk