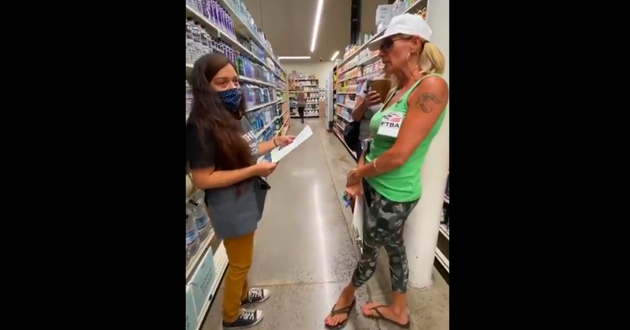 Anti-mask activists pretending to be federal agents are violating federal law, according to a former federal prosecutor. A viral video of people purporting to be affiliated with the so-called “Freedom to Breathe Agency” (FTBA) has been viewed several million times since being cross-posted from TikTok to Twitter on Friday.

“We are with FTBA, the Freedom to Breathe Agency,” a woman wearing a white baseball cap and sunglasses tells a grocery store worker in Laguna Niguel, California,

“Making sure that people’s constitutional rights–civil and federal laws–are not broken. Okay? And so you, personally, need to take this to your manager. Because you, personally, can be sued for this, okay?”

This is a crime and these people should be prosecuted. https://t.co/MD3e2jB6m7

Message to all the haters that stormed my IG account today: “Thank you. Thank you for showing your ignorance to what the United States of America stands for. Our republic was built on promises of freedom and… https://t.co/bf448OlV73

Her name is Lenka Koloma and she is a famous Orange County anti-masker. She makes regular appearances lying at our board of supervisors meetings and can be seen with her chiropractor husband in the San Clemente @chadgoesdeep video about pic.twitter.com/vpoVxFf8mX

ICYMI: The New York Times has reported on the Freedom to Breathe Agency (lol), which fraudulently claims to be a government agency (it is not a gov’t agency, according to the DOJ) https://t.co/MD0OgBEFUo

I designed and printed these to hand back in response to those fake cards: pic.twitter.com/nqeqi1mK3Z