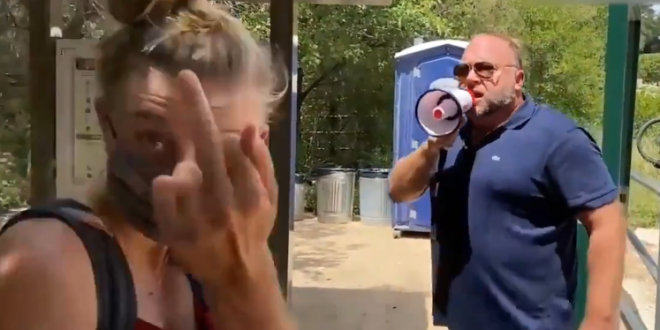 Maskless and with a bullhorn in hand, Austin-based conspiracy theorist Alex Jones stood outside a Barton Creek greenbelt entrance and yelled at trail goers and park employees over the city’s reservation system, which he called an “illegal power grab of the people’s greenbelt.”

In a widely circulated video Jones posted, the host of the website InfoWars said his wife was denied access to the greenbelt because she did not have a reservation, a new requirement by the city of Austin to limit large gatherings at certain trails and parks during the coronavirus pandemic.

“Now you guys use your COVID hoax to like set a checkpoint up to take over the parks and start charging?” he asked the masked park employees, most of whom were seated in folding camp chairs at the entrance to the greenbelt. “It’s unconstitutional.”

Alex Jones is a sad and lonely man. pic.twitter.com/P8ZvRpIJYA

Alex Jones should actually be trending for his epic anti-face mask sketch: pic.twitter.com/62vknnnaMH

Whenever I see Alex Jones trend, I always think it’s a great time to say he is a fucking asshole who put Sandy Hook parents through hell by calling it a hoax and I’m glad he is deplatformed and getting sued and losing money.

this clip encapsulates alex jones’ entire grift: say the most deranged shit imaginable, then desperately challenge anyone to respond to it, even going so far as to chase them as they walk away from you

jones: “fuck off!”
guy being chased by him: “I am fucking off!” pic.twitter.com/GSWV3W9OJo

Imagine being Alex Jones and this is the life you’re living. Yelling through a bullhorn at disinterested teenagers. https://t.co/gCxoEOSoY4