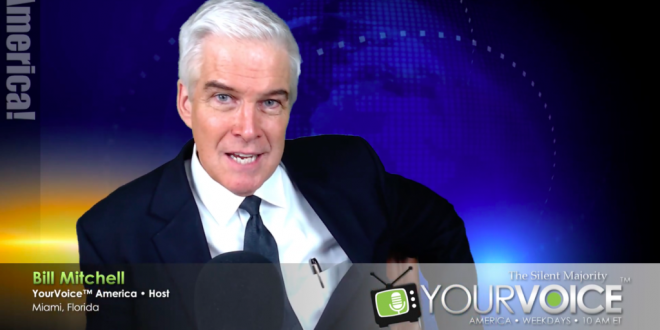 Bill Mitchell, the far-right conspiracy theorist was permanently banned from the platform after he attempted to dodge a temporary ban over an undisclosed violation. Per a Twitter spokesperson: “[Mitchell’s account] has been permanently suspended for violating the Twitter Rules by using one account to evade the suspension of another account.”

Mitchell, the host of the far-right program YourVoice America is mostly known as a Donald Trump toadie who uses his platform to propagate the QAnon conspiracy theory.

He’s faced increasing backlash over the last several months due to his coronavirus-denial claims and accusing Dr. Anthony Fauci of being a “plant” from Hilary Clinton’s 2016 presidential campaign.

Mitchell had more than half a million followers and was frequently retweeted by President Trump. He spread the discredited theory that Barack Obama wiretapped Trump’s phones during the 2016 campaign and has been outspoken in his support of QAnon, which believes that Trump is secretly working to arrest a cabal of Democratic and elite pedophiles. Mitchell hosts a podcast but, until his ban, was most active on Twitter and would often send several hundred tweets a day.

Bill Mitchell was one of the very dumbest people on Twitter, with a brain capable of sending these messages to his fingers to type on his phone pic.twitter.com/wGZURm4y60

Bill Mitchell is responsible for the greatest post of all time, “I’m 53 years old and a Jew has never stopped me from reaching my full potential”

Another top Trump supporter Bill Mitchell with national show banned & sent to a digital gulag where he cant be seen or heard
This is just a sneak peak at what will happen if the left takes power in november. They will not stop till all dissent is silenced
China is their blueprint

You will be missed Bill Mitchell pic.twitter.com/ASWvYzKBfY

If Bill Mitchell is permanently banned, who’s the dumbest person on this thing now?

PS/ Yes, this is the guy who crowdsourced $15,000 to “move to D.C.” and then took the money and moved to Miami instead—even though he’d gotten the money by telling his Twitter followers he needed to move to D.C. to provide them better access to newsmakers. https://t.co/zZ1dBpQ5vj

How will women be able to tell when they are wrong now?

Bill Mitchell’s account got suspended, so please enjoy for the last time the best tweet ever pic.twitter.com/SrV9QWFYn0

Gone but not forgotten.

One of the world’s greatest fucknuckles, Bill Mitchell, has been suspended from Twitter. What a great day! I had saved all his stupid tweet predictions — he got EVERYTHING wrong — but they didn’t survive my recent phone switch. Except for this one, which will give you an idea… pic.twitter.com/j1WvDsqLzy