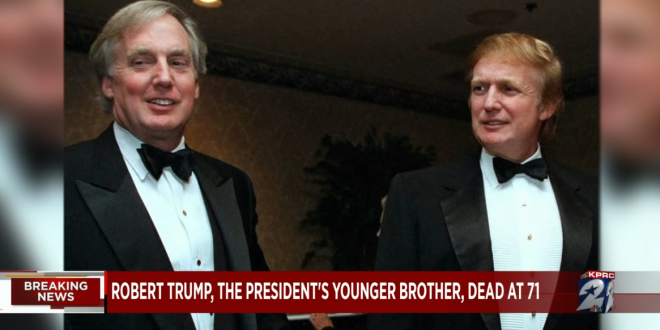 Robert S. Trump, the younger brother of President Trump, died on Saturday night in Manhattan. He was 71. The White House, which announced his death, at NewYork-Presbyterian Hospital, did not give a cause.

Robert Trump, who took blood thinners, had experienced brain bleeds, which began after a recent fall, according to a family friend. President Trump went to Manhattan on Friday to see his brother at the hospital.

On Saturday, when Robert Trump was not expected to live much longer, the president called into the hospital from his Bedminster, N.J., golf club. He shortly held a news conference but did not mention his brother’s health. Friends who spoke to him said he was downcast.

From President @realDonaldTrump on the passing of his brother and best friend, Robert – “We will meet again”: pic.twitter.com/1mBgx1td26

Today is August 15 — the day Trump said he would be too busy to throw out the first pitch at the Yankees game. Surprise! He was golfing. https://t.co/vjKWufTbV8

Everyone grieves in their own way. https://t.co/eZJsdwq5Yf

Previous CHATTER AWAY: Overnight Open Thread
Next After Saying Many Times That Edward Snowden Is A Spy Who Should Be Executed, Trump May Grant Pardon