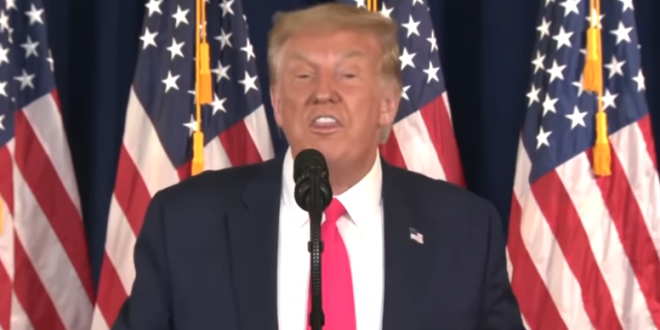 So this moment went viral overnight.

President Donald Trump abruptly ended a Saturday news conference after a reporter challenged him on a lie about veterans health care he has told more than 150 times.

“Why do you keep saying that you passed Veterans Choice?” CBS News White House correspondent Paula Reid asked Trump at the Saturday news conference, during which Trump announced executive actions on coronavirus relief.

As Trump tried to call on another reporter instead, Reid continued, “You said that you passed Veterans Choice. It was passed in 2014…it was a false statement, sir.” Trump paused, then responded: “OK. Thank you very much, everybody.” He then walked away as the song “YMCA” played.

Trump gets frustrated when @PaulaReidCBS won’t stop trying to ask him a question about why he keeps lying about Veterans Choice, then abruptly ends the news conference as “YMCA” plays pic.twitter.com/Z3uVxebKGH

!!! Trump is challenged for I think the first time ever on why he keeps lying that he got Veterans Choice passed – and he ends the “news conference” and walks out.

It’s a pattern. When women reporters challenge him and make it clear that they will keep insisting, his perimeter defenses light up, his systems shut down, and he can’t processs what’s happening. So he ends the briefing. https://t.co/90Ku2gursg

Trump walks out of his news conference after @PaulaReidCBS challenges him on the Veterans Choice lie he has told more than 150 times: https://t.co/4OfLneQ089

REMINDER: The guy who is trying to defund Social Security and Medicare with his Payroll Tax “executive order” had NOTHING TO DO with Veterans Choice, as Paula Reid pointed out.

Look at the rage on his face as he abruptly ends the programda session. Trump cannot tolerate being challenged about his LIES, especially when the person confronting him is a woman. Kudos to Paula Reid for again presenting Trump with the truth! More should follow her lead.

If you’re a misogynist online chickenshit who’s threatened by Paula Reid calling out lies and you still can’t spell “you’re” the rest of us know how you’re voting. https://t.co/9Re5lysg5I

Really enjoyed watching Paula Reid getting REKT again trying to be a showboat. That was really spectacular.